This functionality is available only in the Raster module

The method belongs to the forced trace commands.

The method allows you to trace arbitrary raster lines, approximating them with a vector polyline. When tracing, specify a point on the raster line, and the command automatically follows this line (the tracing direction must be determined) to the nearest node point of the line or to the intersection point and creates an approximating vector polyline - a polyline consisting of linear segments. The node point of a raster line is either its endpoint or the point of intersection with another raster object. Thus, in one step, a part of an arbitrary raster line bounded by two node points is traced – a raster polyline segment. One trace step can create an arbitrary number of segments, the number of which depends on the line complexity and the trace settings.

After tracing each polyline segment, select the further direction of tracing or complete the procedure. Direction is selected by specifying a point on the next raster curve segment adjacent to the last traced segment. The steps and polyline segments can be undone.

The command provides for the mode in which the direction of continuing trace is determined automatically. In this mode, the program offers one of possible directions by showing a special marker on the segment selected as a continuation. Within a specified period of time (by default, the waiting time is 0), you can choose another direction or agree with the proposed one. If the direction is not selected, then after the waiting time has elapsed, the program will automatically continue tracing in the selected direction. 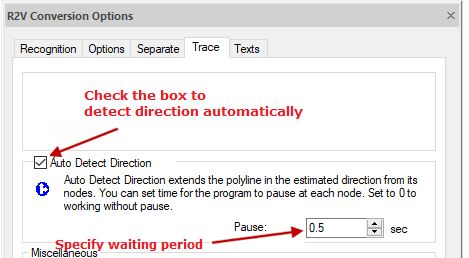 The color and width of the polyline created by tracing depend on the checked Use table box and specified values of parameters in the Separation tab in the R2V Conversion Options dialogue. 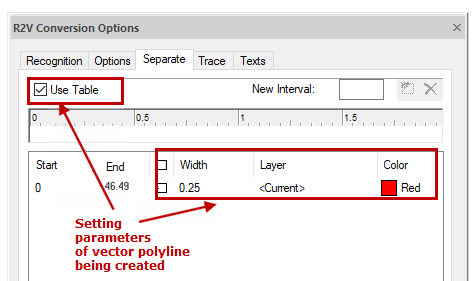 The order of tracing a polyline

4.    Pick points on the raster curve. When the Auto Detect Direction box is checked, a “rubber” line is drawn from the mouse cursor showing the current trace direction;

5.    Manage the tracing process from the context menu;

6.    To complete the polyline creation, select Enter or press ENTER;

When tracing raster polylines, you can use the orthogonalization mode, which allows you to align the generated polyline segments at a predefined base angle:

1.    In the R2V Conversion Options dialogue box, when tracing, check the Line Follow Orthogonalization box on the Trace tab;

2.    Check the Auto Estimate Base Angle box or set the first segment direction in the Base angle field (or using

button measure it on the screen);

3.    Decrease the Accuracy value in the Options tab to avoid creating superfluous segments;

5.    Specify the point on the screen to start the trace. 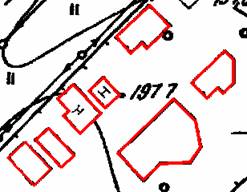 Results of trace with orthogonalization

Info: NanoCAD is a user friendly, low cost, and yet powerful, CAD platform for PC, that allows a great user experience by providing enhanced performance, full capability, a classic interface and native.dwg format support. nanoCAD has been built to deliver design and project documentation for all industrial purposes. nanoCAD includes a full suite of basic and advanced CAD tools for 2D/3D drafting and creating industry-standard DWG-compatible CAD files. Our software provides innovative, collaborative and customizable features to improve your efficiency, and includes a few API's, allowing anything from routine task automation to complex CAD app development. You may download nanoCad for free, using the links below, and buy later, in case you like it.
We collect Cookies
We use cookies to ensure that we give you the best experience on our website. By clicking “Accept”, you agree to our website’s cookie use as described in our Privacy Statement.