There are two types of scale: symbol scale and measurement scale. The values for any of these scales can be set for any object, group of objects or document. New objects inherit the scale values from the document.

To set scale, use the scale button on the status bar.

1.    Select objects. To change the scale of all objects in the drawing, select all objects. If no objects are selected, a new scale will be set only for new objects that are created.

2.    Select the scale button in the status bar.

3.    Select the scale type in the menu (Symbol scale or Measurement scale) and specify the scale value from the list.

2.    In the menu that opens, select the scale type (Symbol scale or Measurement    scale).

4.    Select the objects on the drawing whose scale you want to change.

To copy the scale from a selected object:

2.    In the menu that opens, select the scale type (Symbol scale or Measurement scale).

4.    Select the object in the drawing whose scale you want to copy.

Symbol scale is a settings parameter which decreases or increases the annotation objects in the drawing. This scale type is used for adjusting the display of annotation if it is too small or too big; for example, to change the size of an object’s arrows and text. This scale has no influence on the size of other objects.

To set and change scales, use the scale button in the status bar. If the value is set to symbol scale, the m character is in lower case:

Example of changing the symbol scale of a dimension object: 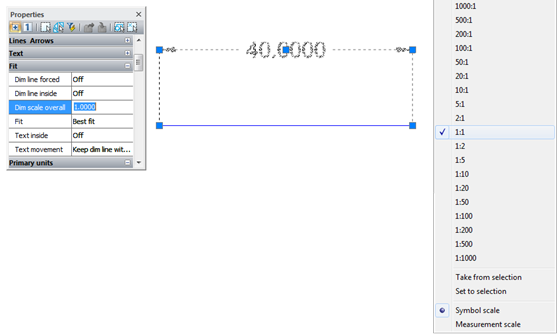 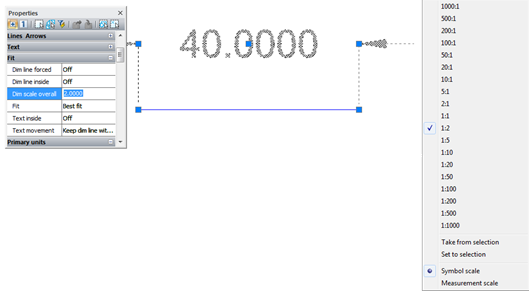 This scale influences objects, but the size of the annotation of the objects stays unchanged. Linear dimensions are also scaled.

Measurement scale can be set for the following objects:

·         Special object from vertical applications can have influences on the measurement scale of an object size in the drawing.

Use this scale if the drawing has a scale that differs from 1:1 scale.

To set and change scales, use the scale button in the status bar. If the measurement scale value is set, the M character is in upper case:

Example of changing the measurement scale: 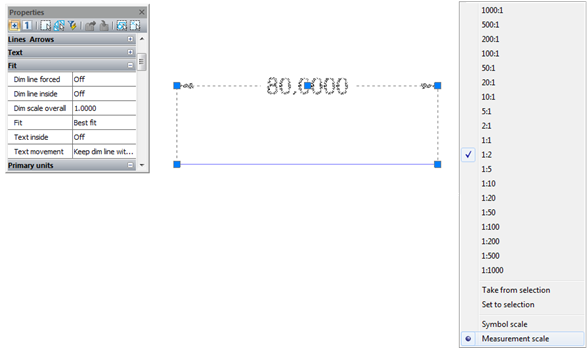 Current scale can be changed to scale from Scale list in Scale toolbar.