Commands are used to create and edit objects, open dialog and start any other operations. Commands can be launched:

·         from context menus called by clicking the right mouse button;

For example, to open the Options dialog box:

The last launched command can be started by pressing the ENTER or SPACEBAR buttons.

The last nine launched commands are available from the context menu (Last commands): 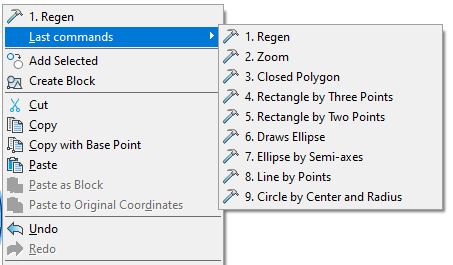 Last commands are shown in the command line.

Use ARROW DOWN and ARROW UP buttons to select one of the last commands and press ENTER to launch it.