The command line is used to enter commands from the keyboard, to show tooltips and nanoCAD messages, to select the options of the selected command:

An accidentally closed command line will appear again after calling any command. If this did not happen, you can use the Restore interface elements command.

In the Command line section of the Options dialog you can change the text and background color of the command line, switch on/off Use Autocomplete and Use alternate font options: 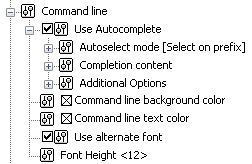 Input of Commands, Aliases and Shortcuts

To enter a command from the keyboard, type the full command name in the command line and press ENTER or SPACEBAR to execute it

Instead of the full name of the command you can use a command abbreviation, the so-called alias of command. For example, instead of typing CIRCLE, you can just type C.

Shortcuts are similar to aliases, but launch a set of commands grouped by a certain criterion.

Note: It does not matter what case is used when typing in the command line.

With the Use Autocomplete mode (Command line section of the Options dialog box) you can choose a command from the list displayed in the command line after you have entered several letters: 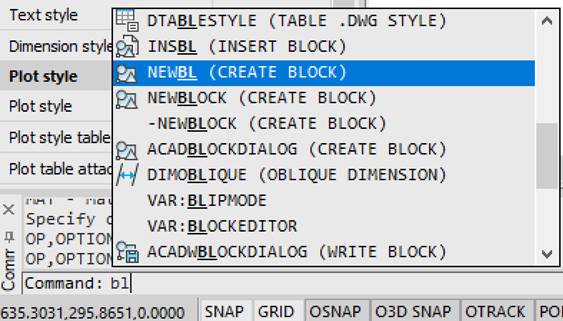 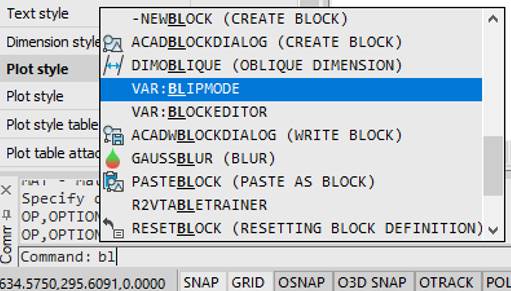 ·         a block present in the document (indicated with BLOCK: prefix in the autocomplete list).

The VAR: command allows you to display only system variables in the autocomplete list: 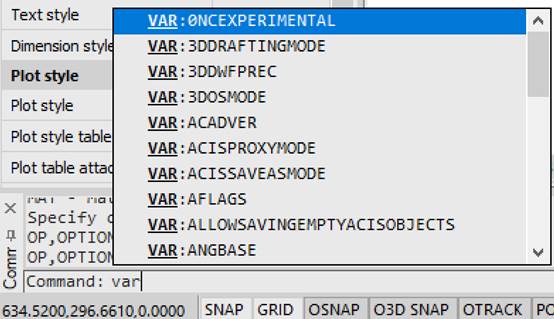 The addition of system variables and blocks in the autocomplete list is managed by the relevant options of the Command line section of the Settings: dialogue 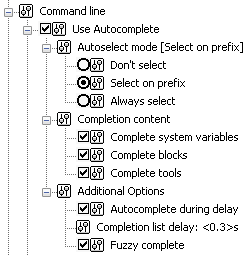 When enabling the Use Autocorrect mode (the Command line section of the Settings dialogue), the autocomplete list includes additionally also the results of search based on fuzzi logic, i.е. search of parts of input line not only in the beginning, but throughout the entire name with automatic correction of possible input errors.

The time delay in display of autocomplete list is managed by the AUTOCOMPLETEDELAY system variable. The default value is 0,3 seconds. The maximum permitted value is 10 seconds.

To select a command from the list use TAB, ARROW UP, ARROW DOWN buttons and the ENTER button to confirm a selection.

You can see a full list of registered commands, aliases and shortcuts in the command line by entering an apostrophe.

To display the command history, press F2 to open the text window: 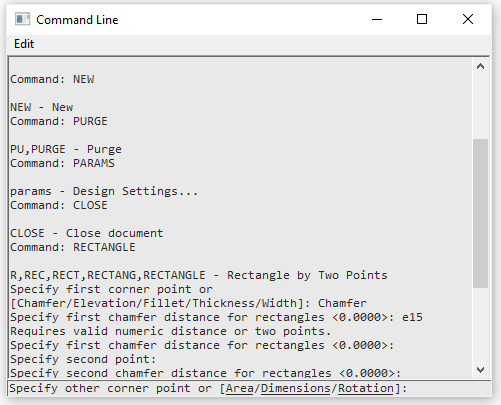 You can close and open the window at any time.

The window is opened at the same location and size as set previously.

but it varies depending on the current command or program state.

The command prompt can include descriptive messages that are displayed in the status bar when the command is running. For example, the prompt during a creation of a circle is:

It can also include interactive keywords in square brackets separated by a slash, highlighted in a blue color and underlined.

note: To prevent confusion with hyperlinks, interactive keywords in prompts are shown in a red color and bold font.

You can type any keyword manually or just click on it. A keyword specified in triangular brackets is a keyword “by default”.

To choose it press the ENTER key.

As an answer to the prompt, type the keyword, or you can just type the capital letter of the word:

Specify next point or [Arc/Close/Halfwidth/Length/Undo/Width]:

For example, to select the Close keyword, type C and to selectUndo type U.

note: The capital letter can be in the middle of the key word.

You can enter different formats of data, text, digital values, coordinates, in the command line.

To use coordinate values to specify a point, enter an X value and a Y value separated by a comma <X,Y>:

If the angle units are degrees/minutes/seconds, the following syntax is used:

The command line allows for the input not only of commands, numbers and points, but also mathematical expressions. It is convenient when the coordinate or number is not known beforehand but should be calculated from some conditions.

For example, instead of calculating the coordinate of a point using the SQRT (349.56-275.90)*2 formula and only then typing it in the command line, like here:

You can use a mathematical expression instead of coordinates in the command line:

To calculate a mathematical expression at any time type the ? sign before this expression. In the following example, a multiplication operation is performed during the line creation process.

After pressing ENTER the result is shown in the command line:

Mathematical expressions can be calculated during the execution of some commands. The following example shows a multiplication expression calculation during drawing a line:

The complete list of registered operations, functions and constants can be viewed in the Command Line window by entering the ? sign and press the ENTER .

Info: NanoCAD is a user friendly, low cost, and yet professional, CAD program for Windows, that allows an outstanding user experience by providing enhanced performance, full capability, a classic interface and native.dwg format support. nanoCAD has been built to deliver design and project documentation for all industrial purposes. nanoCAD includes a full suite of basic and advanced CAD tools for 2D/3D drafting and creating industry-standard DWG-compatible CAD files. Our freeware provides groundbreaking, collaborative and customizable features to boost your efficiency, and includes a few API's, allowing anything from routine task automation to complex CAD application development. You may try nanoCad for free, using the links below, and purchase later, in case you like it.
We collect Cookies
We use cookies to ensure that we give you the best experience on our website. By clicking “Accept”, you agree to our website’s cookie use as described in our Privacy Statement.