The command to undo previous actions and operations.

Launch of the command from the menu by pressing a button, by hot keys or by entering U letter in the command line results in sequential cancellation of previous actions, one at each start. 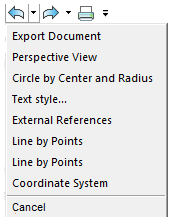 When you hover the cursor over a command item in the undo list, a preview of the scene that would appear after undoing actions up to the specified command will be displayed in the drawing workspace.

The preview is switched off by a flag Undo command settings > Generate preview in the Options dialogue.

Enter the number of operations to undo or [Auto/Control/BEgin/End/Mark/Back] <1>:

Each launch of the Undo command in the command line is attended with the information on current settings: Current status: Auto = On, Control = All.

Actions performed in the interval between entering Begin and End, are combined into one group. Cancellation is performed for the entire group of actions. By using Begin and End options you can create several groups of performed operations, which will be undone in sequence.

Procedure of using Mark and Back options:

Thus, you can set an unlimited number of marks.

·         Run the Undo command, select the Back option. Each performance of Back will cancel all operations before the previous mark.

The command parameters are configured in the Undo command settings section of the Options dialogue (menu Tools – Options). In this section it is possible to control the display of preview of the result for each command step, add the undo list with 2D and 3D navigation commands, set to clear the list of all actions after a document is saved.